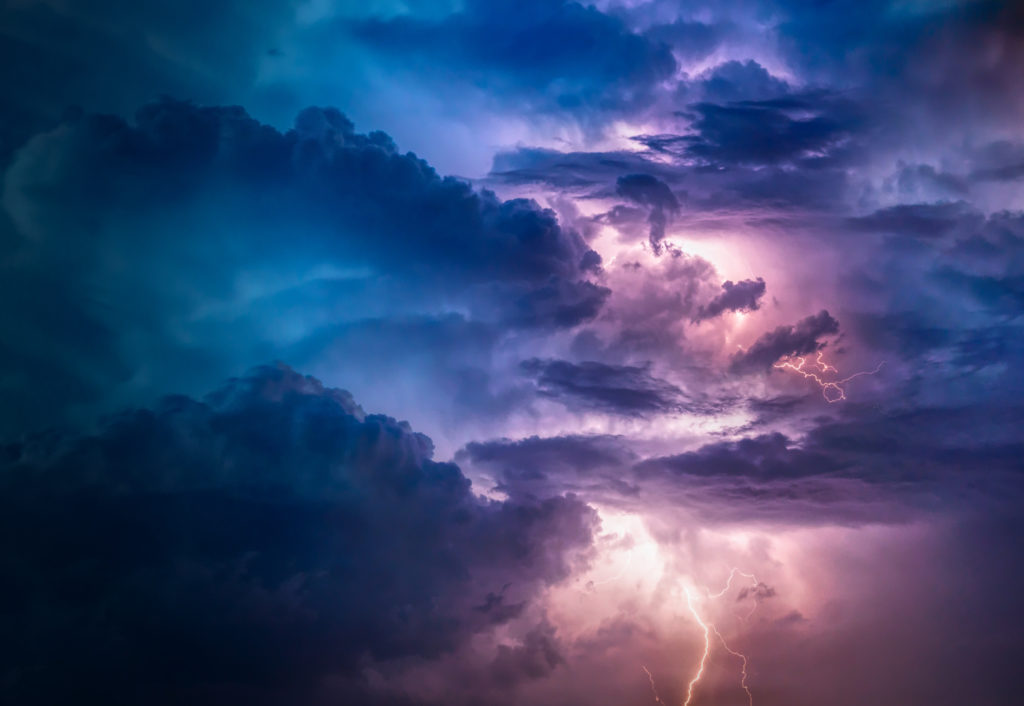 Walking around the smoldering ruins of Ground Zero less than two days after 9/11 was not something I would exactly call a “privilege.” But the experiences of those days are times I will never forget. Though sad and sober, it was an honor to be serving as part of a ministry team in the immediate aftermath of the terrorist attacks. We counseled individuals blindsided by grief, prayed with hundreds of New York’s first responders, and listened to the stories of people from every imaginable background.

As news outlets commented round the clock on the attacks, many of the stories analyzed the physics of how the World Trade Center Towers fell:

The trifecta of physical destruction began as the hijacked jets breached the Towers’ concrete and metal exterior, weakening the structure overall. Intense heat from burning jet fuel compromised and eventually melted steel support beams throughout several floors. The incalculable weight of floors above points of impact was, tragically, mass enough to crush everything below.

The awful spectacle of the Towers’ fall (and the destruction of entire city blocks of buildings and property nearby) is acutely painful to watch even two decades later. The deaths of more than 2,700 people, the loss feeling safe on American soil, and the omnipresent sway Islamic terrorism has caused the world to feel since 9/11, changed life to a degree that overstatement is near impossible.

At risk of extinction? ‘Endangered species’ lists should include these three things.

Just as multiple contributing factors coalesced into the felling of the Towers, the combination of several detriments is bringing down our blessed America. And the pathological irony in the case of our unraveling nation is that three dynamics key to the preservation of America things that any thinking person would want to shore up and affirm the following three things are being actively suppressed and opposed:

Far too many high-profile influencers can’t be counted on to take unflinching stances for marriage and family, objective truth and moral accountability, nor for the sacredness of life and human rights. Elected officials, public educators, and celebrities prattle endlessly about rights . . . but virtually always from a perspective of moral relativism (“It is my right to marry whomever or whatever I choose;” “It is my right to define/express my gender for myself;” “It is my right to have an abortion”). These “rights” are assumed and asserted. Meaningful discussion to the contrary is rarely allowed.

Suppressed and Opposed in Education

American public education has been overwhelmingly secularized for several generations. It is hardly mysterious why the majority of Gen X-ers, Y’s, millennials, Z’s, and younger reject Christianity, traditional family structures, morals, and patriotism, or are clueless about such things altogether. Public education is programmed to crank out masses of compliant little socialists/globalists. We are uploading our kids with vacuous, bankrupt, un-livable philosophies, and this will ultimately mean the loss of our Constitution if it does not stop.

It has been at least four decades since high school diplomas and college degrees represented a type of promise that graduates had learned to truly think, live morally, and to cherish our nation. The left fights hard against school choice because public classrooms have been   blinding young minds from content about morals and patriotism, if not steering them away completely.

Suppressed and Opposed in Entertainment

Pop media and the entertainment industry pulse out imagery and narrative that captures (or at least greatly influences) the imaginations of all ages. Again, with rare exception, values that contribute to the weakening of our society are repeated and reinforced. From the latest “blockbuster” in theaters, to the uber-liberal pages of Rolling Stone, to the logic-bereft desk of The View, leftist views about sexuality, family, religion, politics are endlessly echoed.

Far too many high-profile influencers could never be counted on to take unflinching stances for marriage and family, objective truth and moral accountability, nor for the sacredness of life and human rights. Elected officials, public educators, and celebrities of all strata prattle endlessly about rights . . . but virtually always from a perspective of moral relativism (“It is my right to marry whomever or whatever I choose;” “It is my right to define/express my gender for myself;” “It is my right to have an abortion”).

Family, morals, and life matter — and the left knows it.

Volumes of data affirm the positive outcomes (long and short term) of what is called, “traditional values.” Described favorably or dismissively (depending on who you’re listening to), “traditional values” are at the core of the battle for our nation’s future. Notice, however, an irony regarding those who would have us redefine marriage, relativize morality, reimagine gender, and thoroughly revise America. The very same influencers who reprehend traditional values have a platform and enjoy prosperity because of those values.

The Atlantic published an insightful piece several years ago, titled, “Why is it Hard for Liberals to Talk about ‘Family Values’?” The essay pointed out that for all of the pontifications about the oppressiveness of marriage and the need for sexual liberation, “. . . stable marriage and community are the secret sauce of economic well-being that nobody on the left wants to admit to using.”

The left’s stance that traditional social structures are inherently oppressive and “bad” (a presupposition held to, defended, and enforced for decades) makes for impassioned talking points. But successful, influential Democrat progressives do not live this way, nor do they encourage their kids (if they have them) to do so. But they’re quieter about the ways that traditional “family values” are guiding their own choices.

Democrat candidates advocate for leftist/progressive policy positions with lock-step predictability. Ironically, the affluence and social standing enjoyed by liberal leaders came about in the context of “traditionally married,” two-parent households. In other words, Dems “talk it” but they don’t “live it.” Research documents that economic success is directly tied to family stability. The Atlantic quotes one sociologist who says, “This public/private divide raises a problem: It’s like stable marriage and community are the secret sauce of economic well-being that nobody on the left wants to admit to using.”

The priorities of life, of marriage, and morals: Our Founders knew.

Though career politicians on the left would hardly admit it, responsible government really does have a vested interest in promoting what our Founders (and those who influenced them) would call, “the virtues.” According to Federalist writer Alexander Hamilton, true social justice is experienced only when objective morality (commonly referred to as, our “Judeo-Christian heritage,” or simply called, “the 10 Commandments”) is assumed. Over time, our pervasive belief in God, morality and personal accountability, and consistently a high view of human life has resulted in what philosophers call, “the good.”

But God, family, personal accountability, sexual abstinence until marriage, self-restraint, patriotism, absolute morality these are all things that the left incites each new generation to assume against. And they have successfully imparted their viewpoints to millions. Yet it is impossible to argue that morally and socially our nation is better off for the left’s decades-long campaign of “progressivism.”

A Lesson from the French

Nearly two centuries ago Alexis de Tocqueville, a 19th-century diplomat from France, chronicled his observations of this land in the two-volume work, Democracy In America. He repeatedly noted that the family was at the core of America’s strength. Political analyst Michael Ledeen addressed how de Tocqueville might respond today: “That the very word “family” is regularly conjoined with other words like “single parent” and “same sex,” Tocqueville would find this preposterous, since he knew that the strength of the family, and the character of future generations, rests upon the contributions from both father and mother.”

Teddy Roosevelt on the Decline of France

Some 30 years after Tocqueville wrote Democracy In America, published works coming from the man who would become our 26th President consistently demonstrated a keen understanding of what made for the success of this nation. In Theodore Roosevelt’s analysis of America, he contrasted our history with that of another, not-so-fortunate people, the French during the time period leading up to their revolution. Roosevelt noted that France, in the years that would coalesce into social and political overthrow, was a place of great impiety. “They did not believe anything,” Roosevelt wrote.

He cites American revolutionary Gouverneur Morris (who had written to General Washington regarding the conditions in 18th century France): “ . . . There is an utter prostration of morals, but this general proposition can never convey to an American mind the degree of depravity. . . The great mass of common people have no religion but their priests, no law but their superiors, no morals but their interest.”

In chronicling the birth of America, documenting parts of its early history, and championing what he saw as its superiority to other nations, Roosevelt frequently warned of things that he saw as threats to the country: Loss of God, loss of morality, loss of national spirit, absence of decisiveness and conviction. Roosevelt saw these deficiencies for the threats that they are. He spoke forcefully against atheism (and against atheists like Thomas Paine, in particular): “I have no patience with those who attack, who would destroy, a man’s belief in religion . . . they succeed only in destroying something they take something real away and give nothing in return, leaving the victim bankrupt.”

What would Roosevelt say about college professors today, that majority of whom identify as politically liberal and spiritually agnostic? What would he think of the Democrats “booing” the mention of God at their 2012 convention in my home state of North Carolina? Loss of morals, loss of family, and loss of reverence for human life have been the undoing of cultures ancient and modern (read The Victory of Reason by twice-Pulitzer nominated scholar Rodney Stark).

Knowing this, why are Dems, influencers, and other leaders doggedly hanging on to policies that are (and will) contribute to further national erosion? Leaders who care about this country should advocate for traditional marriage, for moral truth and personal accountability, and for a high view of life. Political correctness be damned; we’re talking about America’s survival and human thriving, here.

Where Are We Headed?

Liberal/progressive ideas are contributing to the weakening of our culture, and the tide must turn if our Constitution (and the liberties enumerated therein) are to be preserved. Leftist powers have held majority sway in politics, education, and culture for decades now. Dare we hope that someone within the ranks of Democrat leadership has the moral courage to ask, “Why are we continuing down this toxic path?”

Whether or not hope for a moral awakening among Democrats would be justified, only God knows. But since we’re on the subject of God anyway, let’s pray to Him that liberal demagogues will not only experience an epiphany but would also turn back from their systematic demolition of America.

PROTECTING THOSE WHO ARE SPIRITUALLY VULNERABLE